Showing posts from February, 2009
Show all

Badkhal flyover connects the various HUDA Sectors, Village Ankhir, Mewla Maharajpur and some other villages to National Highway - 2 i.e. Mathura Road on Badkhal Red Light. It is two lane over bridge but currently too much traffic commutes via this bridge leading to long traffic jams on both sides of flyover. During the peak hours the waiting time is approximately 3-5 minutes. Two more lanes are required on very urgent basis to solve the problem of traffic.
2 comments
Read more

Image via Wikipedia Ganga & Jamuna are famous rivers of India. As per hindu methodology they are treated as Mothers. Bbut currently all the rivers are too much polluted and on verge of disappearance.GangaGanga is so much polluted due to Inorganic and toxic effluents discharged by industries, cremation of human bodies on banks of rivers and practice of throwing dead bodies, flowers and other articles into river makes it dirty.The cleanliness drive / plans for river by government has failed. For Ganga river the Ganga Action Plan had been started in 1986 but according to some sources it 39 percent of primary target is reached. Ganga passes through approximately 29 cities and 70 towns and every city and town throw its waste in river while it is industry waste, garbage, sewerage, or any other thing.Yamuna / Jamuna Yamuna is currently on verge of disappearance because of extensive flow of industrial waste, sewage, dumping of other waste of cities. The most dangerous threating area for …
2 comments
Read more

Image via Wikipedia The National Capital Delhi has large number of high rise buildings and due to loopholes/corruption in system many of them are not safe in case of natural disaster like earthquake. Delhi comes in Zone-IV on parameter of Earthquake measurement. no safeguards are installed, nor the life of these buildings are tested. What precautions are being taken is not known. Regular inspection must be their to save the loss of life and other assets. The safety equipment / life saving equipment required in case of earthquake must be available and ready 24 x 7. Generally in India equipment required in case of earthquakes are not at par with International Standards. So many countries are ahead of us so government must arrange world class equipment to remove debris and save lives.It should be mandatory for all high rise buildings (government/private/others) for having safeguard and regular approvals & inspection by appropriate authorities for occupation. The building who have comp…
2 comments
Read more 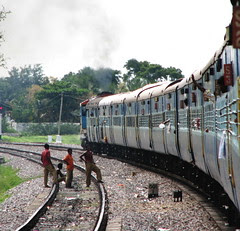 Image by Sid Nair via Flickr In my teenage I listened that Postal Department and Railway Departments are two departments for Government of India which can turn India's luck if these both departments runs into profit it will be huge success and can feed whole Indian economy. Lalu Prasad Yadav turned the Indian Railway in really big profits and he wins the race against all Private Corporate Houses and MNC's in his country. The profits of Indian Railway are moer than the Reliance Industries, the face of Indian Private Sector Companies. He really changed the face of Indian Railway, the first railway minister who reduced the railway fare during his tenure. Today In his last budget he have made announcement for BULLET TRAIN which will be a great facelift for our country on International scenario.He (Lalu Prasad Yadav) is really great!
1 comment
Read more

Image via Wikipedia Lalu may unveil pro-people Railway Budget todayFuel price cuts to help Lalu's budgetHaving managed to keep passengers fares in check for the last five years, Railway Minister Lalu Prasad is expected to announce more sops for train travellers when he presents the interim railway budget in Parliament on Friday.Prasad, who desisted from carrying out any upward hike in the passenger fares despite increase in global prices of crude oil in the past five years of UPA rule, may this time announce some pro-people schemes ahead of the Lok Sabha polls.Though it is a vote-on-account exercise, sources in the ministry said Lalu is keen to share the benefits of the reduction in oil prices with passengers.Speculation is rife that Lalu might slash passenger fares in certain sector while seeking budgetary grant for April-July period.Despite the global meltdown, railways have carried 74.55 million tonnes (MT) of freight during January this year which is 2.9 per cent more than the …
Post a Comment
Read more

Image via CrunchBase Recently Google launched its product for watching oceans with the help of marine experts from National Geographic and BBC. To go through oceans you just need to download the Google Earth 5.0 on your PC and travels across the world oceans. You can learn about ocean climate, species and check for hot spot travels places. Really Google is leading the technology to new edges.Related articles by ZemantaGoogle Earth Shows Ocean Depths, Martian Peaks and Goes Back in Time (takepart.com)
Post a Comment
Read more

Since last one and half year I am registered with www.mginger.com which pays you for receiving sms of advertisers on your mobile. mginger also offers it members many coupons and other great offers.  I just want to say that everybody knows that concept of adsense by google is really working very good and millions of peoples are using it all over the world. The reason of success behind the google adsense concept is Internet is common now a days but mobile phones are more common than Internet and concept of advertising on mobile must work better than Internet advertisement but you should have a good network of peoples who can register on the site for you so that it can earn you some money. there are some other sites also but need to be searched. If anyone of you interested then please click at http://mGinger.com/index.jsp?inviteId=800402 to register yourself.Thanks!
Post a Comment
Read more

From last few days Ex-Prime Minister Shri Atal Bihari Vajpayee is admitted in All India Institute of Medical Sciences (AIIMS) due to infection and currently on ventilator. Doctors says that his condition is stable but due to problem in breathing and infection in lungs he is on ventilator.I wish him speedy recovery.
Post a Comment
Read more

SC does a U-turn, says bandhs OK in democracy-India-The Times of India